90 days  is going to get completed since that moment passed in this land. Few has still stuck with that live experience of that moment in the sun rise on june 17th. Many is gone to analyze various studies about why it has come ?. Each has their own theories and explanations . 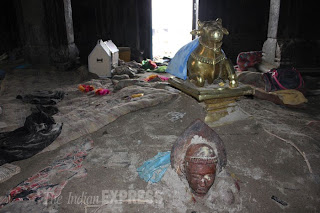 Everyday has millions of moments. Each moment is significant to someone in this world. Sometimes it may be significant for a small group of people. But very rarely a moment is occupying such a vast space in people’s mind or so significant for the whole country or  world and human race .

It is one of such kind . And we can debate it as this came on the way only because of this , and do all analysis or paralysis . It can reveal different things to different people such as to scientific person or geaological person  or local tribe or religious person or environmentalist etc who approaches it for study and introspect. Who knows , some one may claim it has message from the sky.

What is the significance of this moment to me? It has brought gallons of water  and my death moments as if it comes in our movies. May be if I am daily reader of scriptures I may call it as pralaya. The final waters.

Every moment has some pralaya in one’s mind. It is due to their physichological state. But it is not such kind. I don’t know who decided to do that.

Is mandakini herself can decide by her own to ruin thru his world. Or is it happened because of his thandava happened at the top which made her to jump in furious to wash out the sins and disturbances.

But when devi sakthi decided to do it , the other two devis also supported her , thru Bhagirathi and Alaknandha to add her fury and pace and strength to destroy the evils , as normal people claims due to their spiritual guru’s teachings.

The way she came down would have made the lord of death to frozen for few seconds. My mind also struck with emptiness . I am feeling as if I got lost myself in this emptiness . the future also become dead as past, due to  the feeling of the present is filled with death and death only.

Thoughts and visuals are looks like dreams. But it gives a feeling of dreams are happening in reality. Which makes me not able to separate which is reality and which is dream?

In  this emptiness I could not able to feel my thoughts. So what to think? Which direction should I move ? all these questions are just unanswered. But still forcefully working like a mad to think to find out either my direction in life or something to keep my holding.

Though the presence of this moment in my life , does not stop my breath or heart , still I feel it has stopped something within me. I could feel this.

The media and news papers are describing this moment as final moments has started from the kedar dome. The viswaroopa dharshan of mandakini waters frozened many hearts just in witnessing, so just the life less bodies floated in the water. 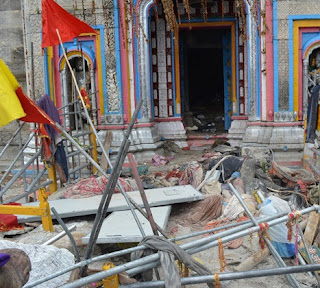 (where i too stand in water)

The hands of the river just took away everything that it touched . many many devotees are blessed with mukthi in their final moments in no time . Those who try to resist are taken away for many miles even after they give up their breath.

The thundering sound and force still ringing in the ears and eyes , taking all my sleep , even if accidentally I hear the jerk sound of train bogies.

Though I witnessed the furious nature of the moment and the water and death at kedarnath itself, still when I see the news or pictures of devasted Himalayas, it makes me to think as reminder and warning for the mankind by the nature.

The flood waters not even come inside the kedar settlement but it came over the settlement , so as to just covered her muddy blanket upon Rambada and Gowrikund, which made hardly any room for any one to escape from her furiousness.

Though I could not realize what made her to come in such fury, but when I look back my old photo collection of kedar, I understood as it came just to ensure the original status of shiva’s town.

I felt as if it is shiva’s wish and decision to live alone in that land for some time. But at the same time , I also thought , did mandagini came in such fury , by changing her natural course of travel in the last 100 years, because to clean the space which is occupied by corruption and cheating.

Or did she decided to turn her way, just because to answer the prayer of her devotees to clean the space by eliminating all who destroying the image of sacred spiritual process with drinks and other things

The one month stay period , its every long moments , flashing in my eyes , the one who came from southern part of india .

I am just travelling within myself  in that memory.