Not just one more monday- my first meeting with sadhguru


It was August 2nd 1993, Monday. The nation prepares for the celebration of its freedom. Me also preparing myself to appear for another big tournament in Bangalore in next couple of months.

The new cricket ball in my hand swings much better than ever before. Captains will select me in playing eleven because of minimum of two / three wicket chances in my first spell. Don’t know anything else . And the exposure of more and more experienced players seasoned my action.

The coaches, training camps made me to live like a dream player which I thought for many many days. The exposure of higher league matches made me to realize how much effort and skill needed to go as one among even in the 15 probables. First time I thought why I not lived in a metropolitan city.

In the same time, Swami Nirakara who was a known friend for me long time ago, due to various social activities, said that there is going to be a yoga program in namakkal city.  He was attended in tiruchengode city earlier.  He   was organizing so many like that at that time, naturopathy camps, spiritual camps, social projects etc etc. Ofcourse he is one of the pioneer for many of us, to start our carrier. Initially I was reluctant because of not willing to meet any sanyasis or swamis.

Since 1989, though even before, still this year is a significant mile stone in my life, to turn inward.  By that time I was living on the banks of river kaveri, at mela chinthamani, tiruchy and on the other side of the river it was sadhguru shri Brahma’s ashram which I came to know only latter life exposed isha to me.  But I am sure that, just being in that radius, brought many things to my life including various experiential processes that lead to unanswered questions.

But the same thing ended up when I  read  the lines of  an article ,it goes like this,  that if fruit get ripped bird will come to eat similarly  guru will come and grace , no need for one to search for him.  These lines ended my book reading habit and searching for answers to the questions offered by life. Exactly 3 months later, now Swami Nirakara, and then prabhakar asking me to join in yoga class.

He keep on explaining benefits of doing yoga which I am not impressive but when he told , I can be better player in cricket if I brought body , mind coordination I started to think about it.  The hesitation is not because of yoga or any other thing, but basically I won't to go and ask anything, even in temple, since the feeling of what some one or god can give if i live without working for it.  I visit temples to see its architecture, to live in the space where magnificent people created huge space for the divine at least for some time in my life.

Though I was reluctant with in me, somehow he convinced me to join in the class. So I joined.  First day when I go, first time I wake up very early in the morning, even before sun rise, took my bicycle. I used to go like this only if cricket practice session is there otherwise......when I cross my school, on the way to the mandapam, a thought for few minutes to go inside and join in cricket practice. With my friends. Few seconds I could not decide which way I should move further. But something pulled me, the main reason how to answer Anna if he asks sometimes later. Any way I am not going to meet some swamiji or sanyasi, so I went to the mandapam from there.

At the entrance, the first glimpse, he stood in white and white, talking to few people, suddenly something flashed in life. The first three hours with him, I don’t know some way I like to be with him. I just looked up him totally, not a single word that he spoke I listened.  But the way he spoke Tamil, I enjoyed. First time some rules entered in my life and I took some responsibility for something to happen in my life without knowing.

Much later I came to know, he is the guiding light, Guru 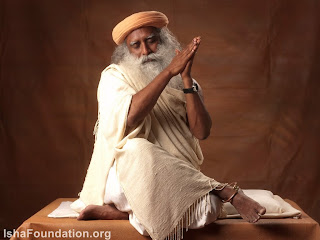 But now 17 years gone since that monday, much things happened. Every week has Monday . But this Monday and this moment  only once in my life.

For the role he took, I yet to become worth

Let  I make it happen at the earliest?

Posted by swami sushantha at 23:30